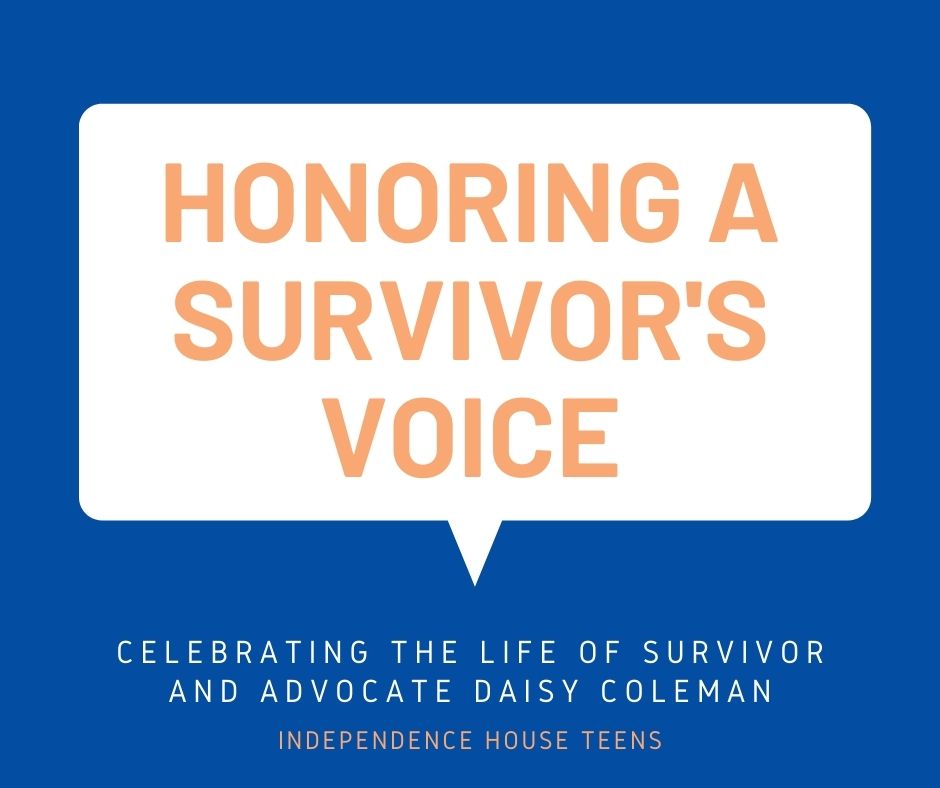 Daisy Coleman lived a life dedicated to helping survivors of sexual assault by advocating for better education in schools about prevention strategies and how to recognize and respond to the impact that sexual assault has on youth. Daisy didn’t easily choose this role, the role chose her after she was sexually assaulted by a peer while at a party when she was 14 years old. Her experience was shared in the documentary Daisy and Audrie (available for free streaming on Netflix) and her advocacy was born out of frustration and disappointment with the legal system and from the response from the community who chose to turn their heads away from this tragedy. Daisy didn’t go away, she got louder and more involved with systems and supports who’s missions were to make big changes in the way our communities view sexual assault and the responsibilities that leaders have in educating youth about preventing dating violence and sexual assault.

Survivors NEED support. Survivors NEED someone to believe them. Survivors NEED to know that if they have enough support they can heal and grow. Daisy and her family had to trailblaze their way through a system that did not have her back. Daisy dedicated her time to an amazing organization called SafeBAE. On their website, SafeBAE defines their missioni:

“SafeBAE is a survivor-founded, student-led national organization whose mission is to end sexual assault among middle and high school students. As the only national peer-to-peer organization of our kind, we help promote culture change by giving teens the tools to become activists and shift school culture through raising awareness about dating violence, sexual harassment and assault, affirmative consent, safe bystander intervention, survivor care, and their rights under Title IX.”

Daisy proved that it is possible to feel empowered after a terrible event and to use that empowerment to advocate for other survivors. She was a beautiful, creative, talented, strong and brave young woman. We will forever be grateful for her voice, her energy and her willingness to share the most vulnerable parts of her life with us in order to help make a difference in the fight against sexual assault. Her work as an advocate for SafeBAE and as an ambassador for PAVE (Promoting Awareness and Victim Empowerment) has given other survivors hope and has paved the way for more protections in the education system and legal system when a survivor comes forward to report their experience.

‘I want survivors and victims to know that they’re not alone in their endeavors. ‘They don’t have to go on national television, they need only tell their family and if they don’t want to report it they are most definitely supported by an army of people standing beside them regardless.’

Last week Daisy died by suicide. Her legacy can live on in each one of us who takes the bold step to say “ENOUGH” when it comes to dealing with sexual assault. There are agencies like SafeBAE or like Independence House all across the country who are ready and willing to listen to survivors and there are many empowered advocates like Daisy who put themselves out there daily to work hard and support the potential for progress when it comes to education and prevention. You are never alone. Daisy’s message promises that.

Crisis Text Line: Text HOME to 741741 to connect with a Crisis Counselor

Audri and Daisy; A Discussion guide for parents and caregivers: http://www.audrieanddaisy.com/wp-content/uploads/2016/09/AudrieDaisy_Parent-Discussion-Guide.pdf